Name of submitter: Heart of the City Inc. (‘HOTC’) 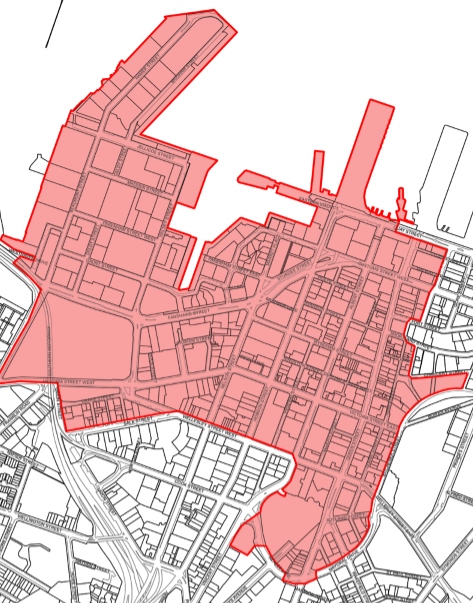 The precinct is characterised by its active water edge maritime passenger operations (including cruise ships), marine and port activities, proximity to the city core, and areas of low-rise character buildings.

Captain Cook Wharf currently forms part of the working port infrastructure where public access is necessarily restricted. It may be appropriate to provide for public access and development if this wharf is no longer required for port operations.

The purpose of the precinct is to provide for ongoing use for maritime passenger operations and other marine and port activities, and in parts of the precinct to provide an environment and an appropriate scale of built form for public activities, marine facilities and events, while maintaining public access to the waterfront and providing for sustainable land and coastal management within the precinct.

(1) A world-class visitor destination that is recognised for its quality buildings, public open spaces, recreational opportunities, marine and port activities and facilities and events.

(4) Public wharf space developed and used for predominantly public activities for the benefit of the people of Auckland and visitors while also enabling marine and port activities and maritime passenger operations.

(3) Enable a diverse range of activities while:

(4)Provide for continued use of all berthage areas adjacent to public open spaces for maritime passenger operations and other marine and port activities.

(6) Encourage the development of a diverse range of high-quality visitor experiences including promenading, coastal recreation and temporary activities.

(8) Enable public access and events along Queens Wharf in a manner that does not constrain or conflict with the use of this wharf as a terminal and berthage for maritime passenger operations, cruise ship operations, other visiting non-cargo vessels and public transport facilities.

(11) Limit the loss of identified significant public views from the city to the harbour and adjacent landscape features.

A (A36) ‘Coastal marine area structures or buildings not otherwise provided for’ require Discretionary Consent.

Purpose: manage public spaces and accessways to achieve Policy I202.3(9) of the Central Wharves Precinct and Policy H8.3(37) of the Business – City Centre Zone.

(2) All public accessways within and around Princes Wharf and Queens Wharf must be available to the public at all times except where it is necessary to temporarily restrict access for security, safety or operational needs associated with marine and port activities or temporary events permitted under the Auckland-wide temporary activity rules or by resource consent.

(3) Limit exclusive occupation to where it can be demonstrated it is necessary for the efficient functioning of the use and development or is needed for public safety, and any loss of public access and use as a result is minimised and mitigation is provided where practicable.

(4) Avoid granting rights of exclusive occupation in areas with high public use and where it will have a significant adverse effect on public access and recreational use of the common marine and coastal area.

(11) Determine the appropriate duration for granting rights of occupation having regard to the:

(b) level of investment in the development and need for security of tenure to ensure its financial and economic viability and/or long term public benefit;

The Council will restrict its discretion to all of the following matters when assessing a restricted discretionary resource consent application:

(e) effects on existing uses and activities (including significant infrastructure);

(i) effects on views to and from the surrounding area, and visual amenity effects from the presence of the structure.

The Council will consider the relevant assessment criteria for restricted discretionary activities from the list below:

(iv) whether the layout of structures and activities enhances public access, including pedestrian access, to the coastline and particularly to any areas of public open space; and

(v) whether any loss of public access to, along and within the coastal marine area has been mitigated, including through provision of facilities such as public boat ramps, lookout platforms, and alternative access.

(e) effects on existing uses and activities (including infrastructure):

(i)  whether proposals avoid, remedy or mitigate adverse effects on existing activities as far as practicable, taking into account both activities in the coastal marine area and on adjacent land;

As discussed in the Natural Character, Landscape and Visual Amenity Effects Assessment attached as Appendix 7 the proposed new mooring dolphins and gangway have been designed to fit with the existing character of the waterfront as a working waterfront and port, utilising similar materials as are utilised within the existing waterfront structures. The mooring dolphins and gangway also operate in a similar way, having a primary function as a port facility mooring structure, while allowing public access onto the first 36m of the gangway access when not required to be closed for operational use, as is the case with the existing operation of Queens Wharf.

The proposal would substantially change the sense of openness and the character of the uninterrupted harbour waters from these viewpoints and result in adverse effects ranging from moderate to moderate-high (i.e. effects are considered more than ‘minor’ but not ‘significant’).

i. consent duration for the Dolphin structure be 5 years or up to a maximum of 10 years, and;

ii. a requirement for removal of the Dolphin structure within a reasonable period after the consent expiry, or prior to the expiry date should the Dolphin no longer be required for mooring extra-large cruise ships (e.g. due to the availability of alternative berth facilities deemed suitable by Panuku);

iii. such further and/or consequential relief to address the matters raised in this submission.

Address of service of submitter:

Heart of the City