With Auckland Heritage Festival kicking off later this month and the city going through big changes at the moment, we were inspired to talk to a few city centre businesses with a whole lot of history - over 400 years’ between them to be more exact – about some of the changes to the city since they’ve been around and the importance of heritage to the city and their business.

“Well, Shortland Street was the city,” Rowly Potter says about when Tanfield Potter set up shop back in 1861. Shortland Street was also pretty much on the waterfront back then – reclamation between Fort Street and Customs Street only started in 1859. Rowly's grandfather, Ernest Herbert Potter, bought into the business in 1895, a few years before the shop was one of the city's first to embrace the new technology of gas lighting to show off their window displays of ceramic products.

Sanford also started doing business on a much different waterfront to the one we have now – Albert Sanford sold smoked snapper directly from his boat moored to the steps of the old Queen Wharf that ran straight out into the harbour from the bottom of the street back in the 1870s, before Quay Street even existed. 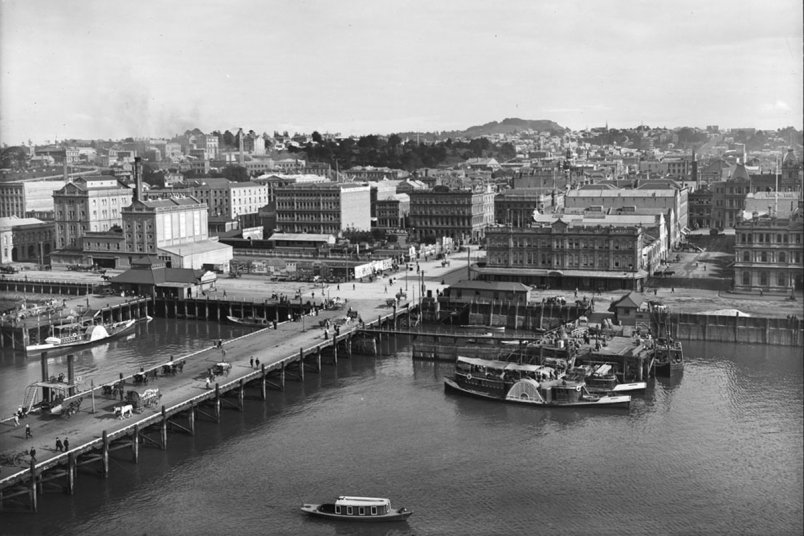 By the time Smith & Caughey’s opened its doors in 1880, Queen Street was well and truly the main street. While the store’s been in the same Queen Street location for 138 years, Smith & Caughey’s Chief Financial Officer Jason Copus says the buildings have changed a lot. Neighbouring buildings have been acquired, there’s been refurbishments and facelifts – including the Edwardian and Victorian facades being covered up in the 1930s – and new buildings have been added – including the eight-storey Lippincott Building, which faces onto Wellesley and Elliott Streets, in the 1930s. 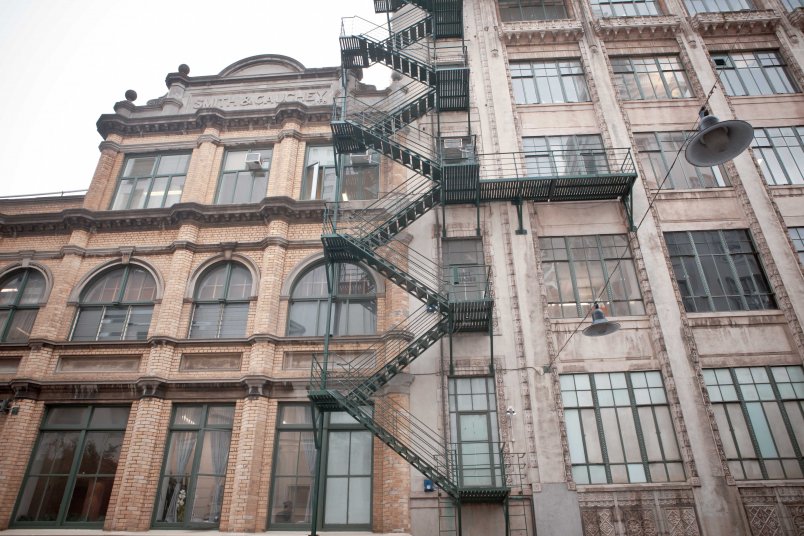 The Lippincott Building to the right of the shot, with an older building to its left. Image: Duncan Innes

Dean McIntosh, General Manager Risk and Corporate Affairs at Sanford told us they’ve been based in their Jellicoe Street offices, fish market and factory since the 1920s, after spending time in Federal Street (from 1881) and corner Albert and Customs Street (from 1894). They’ve also owned a number of fish shops in the city centre over the years. 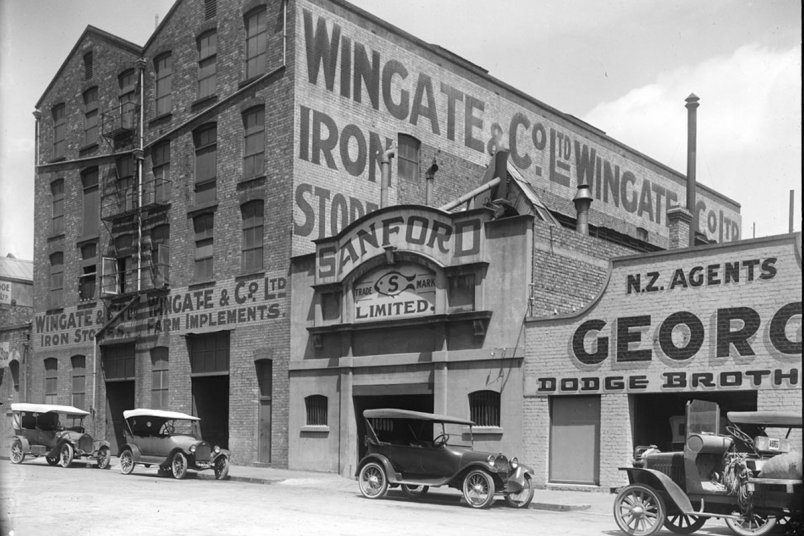 When Roly started working in the city in 1960, shopping was a real occasion. “People came to town. The ladies came dressed up with hats and gloves back then.” He says there was a lot of industry too – Dominion Motors and Dove Myer Robinson’s clothing factory were where Mayoral Drive is now – and there was a Chinatown on Greys Avenue, that ran right through to Queen Street, where the Civic Carpark and Aotea Square are now. 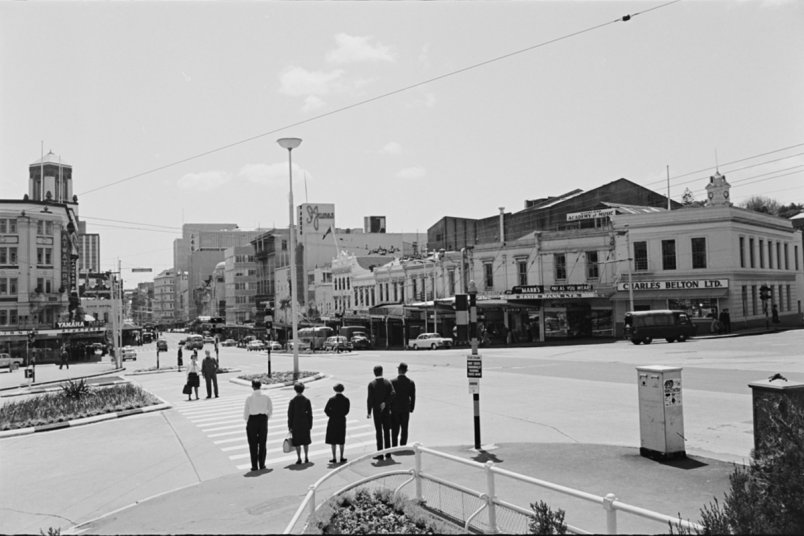 Mayoral Drive and Greys Avenue aren’t the only roads that have changed over the years; Dean told us about the road that used to run across from Wynyard Quarter to the Viaduct. “Because there were no shops around here in those days, we had a taxi that would take staff in to town and back at lunchtime. But that was one of the big changes when America's Cup came along, the redeveloped that whole area for the better and it's made it into a fantastic place for the public as well.”

Dean’s worked for Sanford since 1992, a few years before Team NZ’s 1995 cup win jump-started the transformation of the waterfront area. By the time the defence took place here in 2000, the Viaduct had transformed into a dining, entertainment and apartment-living precinct and a lot of the industrial operations in Wynyard Quarter were on the move. By 2011, when the Rugby World Cup hit town, space that had earlier been occupied by marine businesses, free car parking, storage tanks and empty wharves had become the North Wharf dining precinct, the ASB head office, more restaurants and the ANZ Viaduct Events Centre.

“Since 2000 we've kind of remained and everything else has been built around us.” While a lot has changed, Dean points out heritage features that have been kept to protect the character of the area – the storage tanks that have been incorporated into the design of Silo Park, the industrial red doors at Jack Tar, and the Sanford building itself. “Our building was seismically strengthened last year, and we could have pulled it down and started again but we chose to actually maintain the building.” He says the history of the fishing industry and Maritime Museum are important to the area’s story too. 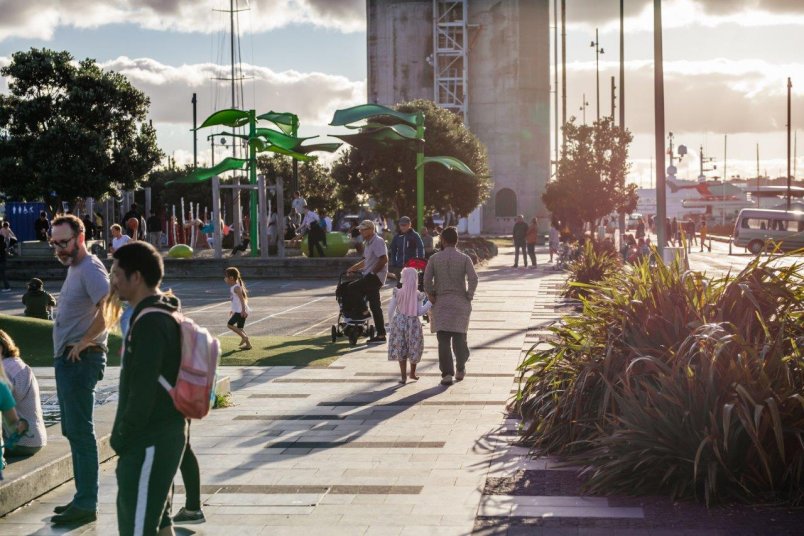 Since Jason started working for Smith & Caughey’s 12 years ago, he’s seen the upgrade of Queen Street and the development of shared spaces like the one out their back door on Elliott Street. He’s seen a shift in the demographics of shoppers too, with a huge rise in the number of Asian customers. He says they’ve changed the way they target their market and plan their staffing to cater to the growing market. “There's a lot of tourists from that area and also residents within the city as well of Asian descent.”

He thinks that heritage is one of the strong points of the city and a business like Smith & Caughey’s. “Having the same family own and control this business for the whole period of time, that's very unique in itself, but also by having the buildings it adds a certain ambience and feel. I think that does attract people to it as well, you feel a sense of belonging. The fact that it's been like that as long as you can remember.”

He says it’s important that change can be accommodated while protecting that heritage too. “As the city has evolved and technology and retail has evolved the buildings have had to be adapted and changed and I think that's also part of the whole heritage thing. Otherwise the reality is you just wouldn't be operating this sort of business out of it anymore.”

Roly says he’s happy that there’s more focus on protecting heritage now than there was a few years back, and is glad to see heritage being refurbished so it can continue to serve the modern city, giving the Auckland Art Gallery as a good example.

Dean thinks we should look to some other cities around the world, and how they protect and share their heritage. “We have not long come back from Edinburgh and the heritage there and the heritage buildings and how they've kept it and it keeps drawing people back. It is important and there is a story to tell, as long as it is told, and not forgotten I think.”

Auckland Heritage Festival runs from 29 September to 14 October this year. Check out our city centre event picks at heartofthecity.co.nz