America's Cup - new milestones and the value of community engagement

Work is well underway in Wynyard Quarter for the bases and viewing facilities needed to host the 36th America’s Cup in 2021, and Wynyard Wharf is being developed into a much anticipated public space.

"We only build the platforms – the syndicates build their own bases on top – so what we're doing now is the dredging and floating infrastructure they need to be able to use the wharf."

Goudie says that if all goes to plan, Emirates Team New Zealand should have boats in the water at Hobson Wharf by April. (See the bottom of this article for the full timeline of upcoming milestones.) 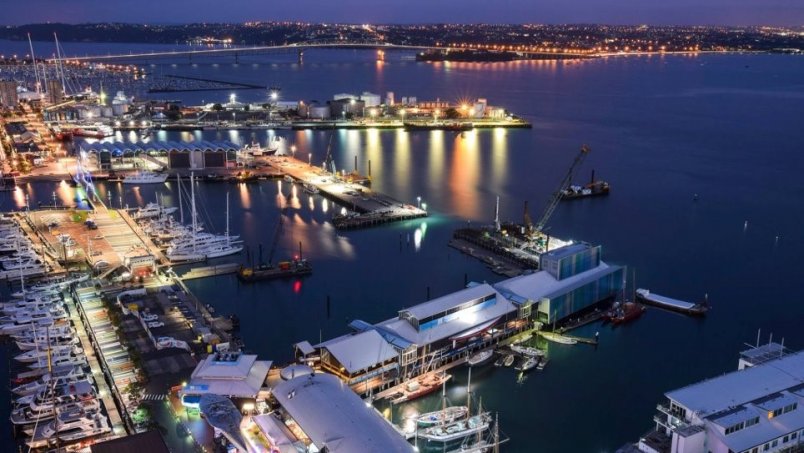 Construction underway on Hobson Wharf for the America's Cup, as of February 2019. Photo: Wynyard Edge Alliance

Although the work being carried out by Wynyard Edge Alliance is focused on the main event, the America's Cup, Goudie maintains "it's not just an America's Cup story, it's also a city centre waterfront story."

"We're very conscious that this area needs to work as a public space long after the event is over."

Panuku and the WEA have taken a collaborative approach to working with businesses and other key stakeholders to try and ensure a positive experience during construction and during the event itself.

"Community feedback has shaped the way we are carrying out the construction. It's influenced the methodology of construction – and helped determined what controls are in place like what noise and vibration limits should be.

"For example, when we start a new construction work that may impact people nearby, we would re warn, check in to see how they're finding it and in some cases agree to how we might test the impacts.

"We want to make sure the community is comfortable with what we're doing and the approach we're taking - especially given the scale and volume of work this project involves."

The WEA also communicates with local businesses through regular Community Liaison Group (CLG) meetings, which Heart of the City attends.

The meetings offer full visibility of planned construction methodology and timeframes, with the aim of putting it all in context of the wider programme.

Goudie says he knows businesses are at the forefront of the challenges presented by construction, so he makes sure there is a strong emphasis on understanding and information at CLG meetings.

"It's really important to us that we're proactive and honest in the way we communicate with businesses and the wider community," says Goudie.

"We make sure we're giving people the full picture and not just telling them what we think they want to hear.

"Obviously there are people with objections or concerns and it's important we engage with them, but equally there are people who just want to be informed and kept in the loop. We use CLG meetings as an opportunity to work with all parties, build  excitement and - ideally - even cultivate brand ambassadors."

While the WEA's main responsibility may be to oversee the infrastructure build for the 36th America's Cup, their ongoing engagement with city centre businesses and residents is proving just as important - it demonstrates the value of collaboration and openness in minimising the impact of construction for all.

Find out more about the 36th America's Cup programme of work here.