Panuku Development Auckland has recently announced plans to replace the Wynyard Crossing pedestrian bridge that links the city centre to the waterfront with a new, more reliable bridge.

The current bridge was installed as a temporary structure for the 2011 Rugby World Cup. According to Panuku, it is reaching the end of its useful life and needs frequent and costly repairs to keep it running smoothly.

“The new bridge will operate more efficiently and cater for the greater number of people who live, work and pass through Wynyard Quarter, as well as the surge of visitors expected to be spending time on the waterfront for the America’s Cup.

“Hosting AC36 will help to accelerate more projects like this. It will leave an infrastructure legacy for Auckland that will benefit our city well after the yachts have stopped racing.” 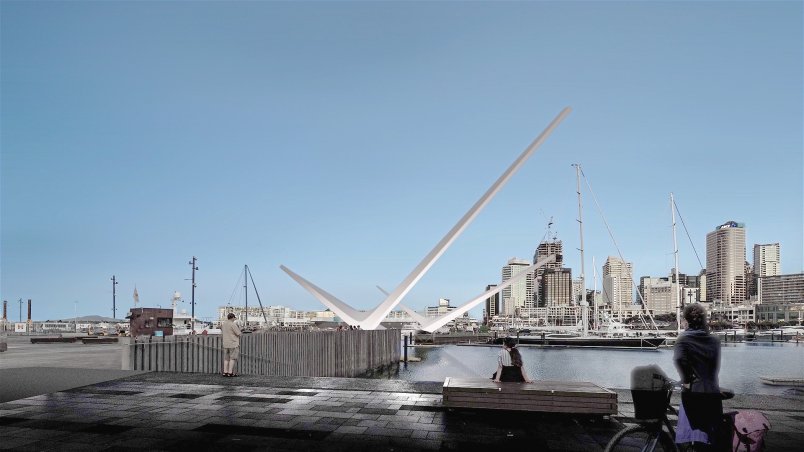 Allan Young, Panuku Director Development, says the replacement opening bridge will be visually spectacular and larger than the current bridge.

“The ‘double leaf’ design is a beautiful structure reminiscent of modern yacht masts or the wings of a large seabird,” says Young.

“It will be a landmark addition to an already thriving neighbourhood and will be something all Aucklanders can be proud of.”

The final design of the bridge, which is under consideration, will aim to meet three key criteria:

The proposed ‘double leaf’ bascule bridge is expected to be 60% lighter to lift than a single arm design, using far less energy to operate.

Maintenance can be carried out on each arm separately, adding to the efficiency of the structure. It can also be built using smaller, less intrusive cranes.

Providing resource consent is granted by mid-2019, construction will start in early 2020 and complete by the end of that year.

During construction, a temporary pontoon bridge will be in place for pedestrians to move between Te Wero Island and Viaduct Harbour.

If consent is delayed and the bridge is not able to be built by 2021, works will be undertaken to ensure the current crossing operates as efficiently as possible during a busy time.